Black River Drive In Theatre was built in 1950. Opening in August of that year, by Sylvan Leff. Sylvan operated the theatre into the early 70's at which time he leased the Black River Drive-In to Panther Theatres, that subsequently became Country Wide Theatres. They Operated the Drive-In for a couple of years and then sold it to ATKO Canton Corp in Syracuse NY, that was owned by Charles Girrard and Anthony Kolinski. ATKO Canton operated several Theatres including 7 Drive Ins acrossed the North East, including both the Starlite and Northside Drive Ins in Watertown NY and the Midway Drive In in Minetto. 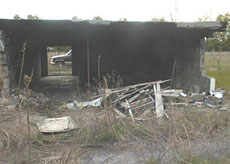 Atko Canton operated the Theatre into the mid 1980's when nationwide declining attendance lead to the demise of many Drive In Theatres and ceased operations by leasing it to Jeff Szot, who currently operates the 56 Auto Drive-In located in Massena, NY . Jeff operated the theater for one season. After closing in the fall, a fire badly damaged the concession building.

The Theatre remained closed for about the next 20 years.

In the mid 90's John Nagelschmidt, who owned and operated the Midway Drive Theatre In - located in Minetto, NY - purchased the Theatre from Kolinski & Girrard. The long closure prohibited the Theatre's reopening until newer Health codes for Water and Sewer could be met. 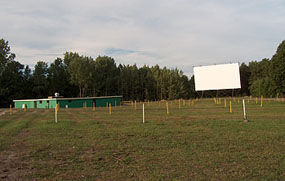 When the Town of LeRay had the foresight to bring water and sewer service to the area, it made reopening the Black River Drive-In feasible. In August of 2005, John Nagelschmidt, and Loren Knapp, who was the long time projectionist at the Midway Drive In, together formed Black River Drive-In, Inc. John and Loren worked diligently from that point on seeking various Board approvals and rebuilding the Theatre practically from the ground up. On August 18, 2006 the Black River Drive-in Theatre reopened it's doors to the public.